As told by Philip Thompson (PMUG’s second president) in Letter from a PMUG Founder in Far Away Vermont below, there was great enthusiasm when the Macintosh became available on the Princeton University campus. PMUG formed out of an Apple II computer users’ group to support University students, faculty, and staff who used the new Macintosh.

During those early days, a LaserWriter printer made available to PMUG members became popular, as were MacFest computer fairs sponsored by the group. In time, membership expanded to the point of the group becoming mostly attended by those not affiliated with the University.

Letter from a PMUG Founder in Far Away Vermont

This article originally appeared in the January 1993 issue of the PMUG DIALOG.

PMUG DIALOG editor, Terry Wilson, asked me last summer to recall some of the early history of the organization, back before most of you joined. Well, I’ve finally gotten around to sitting down and making some notes on how it all got started some nine years ago.

We actually have to back up a couple of years before that, because PMUG was an offshoot to the old University microcomputer user group sponsored by the then Computer Center. I started attending those meetings because I had bought an Exidy Sorcerer (about which I remember very little—including the exact spelling of the name). We were mostly interested in cataloging who had what microcomputers (they weren’t called personal computers at that time) and what they were doing with them. As Apple IIs became more popular, I upgraded to a IIe and discovered that much better technical information was available at the non-University Princeton Apple User Group. When the Macintosh came along, however, this group didn’t want to have anything to do with them, so the proud new Mac owners—almost entirely those connected with the Princeton University who could get early delivery and reduced price through the Apple University Consortium (AUC)—were on their own.

A PMUG member exploring the posibilities of a Macintosh II.

The initial hype for the Macintosh was so great that everyone at the University who could scrape together a couple of thousand dollars signed up the first day. I was working out at PPL (Plasma Physics Laboratory) at the time and couldn’t get in until lunch time, so was number 117 on the list. Enthusiasm was great, but there were problems: the University Store would only accept certified checks; the vendor who was handling the purchase for the University was doing a poor job of support; and the Computer Center (being primarily concerned with the operation of its IBM mainframe) was indifferent if not hostile to the needs of Macintosh users.

Since these were all University problems, we turned back to the Microcomputer User Group for help. However, by then this group was mainly concerned with all the IBM PCs that were flooding onto the campus, many through a special grant from IBM. To support these PCs, the Computer Center hired "personal computer" specialists—soon even one who was nominally to help with Macs. When it became obvious that a new organization would be necessary to address our problems, this latter person (Dania Stager-Snow), a professor and a graduate student in engineering who were developing scientific notation capabilities that would be known as the popular Princeton Font (Dr. Harvey Lam in Mechanical-Aerospace and Dave Dougherty in Civil), and I (having come to the Engineering School as director of the Microcomputer Applications Lab) started an informal group.

PMUG early meetings convened at the CIT building at 87 Prospect Ave. in the room shown. This room was later used for some of the many SIG meetings PMUG members organized. Dialog editor Megan Peterson led the Desktop Publishing SIG for a few years until, like many others, it folded for lack of attendance.

Dave became the first president of what soon took the name of Princeton Macintosh Users’ Group, and I got permission from the Dean of Engineering to set up the "PMUG Corner" literally in the corner of my lab and to provide computers and a projector for meetings and to set up a BBS specifically for Macs, with one of my student employees as the sysop. Meanwhile, since Princeton was one of only about 30 schools in the AUC, this user group got special consideration from Apple as a conduit for support of Macs on campus. We early on got grants from Apple of a couple of Mac XLs (modified Lisas), a LaserWriter, and much software.

PMUG early meetings convened at the CIT building at 87 Prospect Ave. in the room shown. This room was later used for some of the many SIG meetings PMUG members organized. Your present Dialog editor, Megan Peterson, led the Desktop Publishing SIG for a few years until, like many others, it folded for lack of attendance.

Cover from the Fall 1985 PMUG newsletter.

By the time that a formal constitution was drawn up for PMUG, Macs were becoming available to the general public, but vendor support was still poor. So the constitution specified that the officers had to be associated with the University, while allowing non-University people to take part in the meetings and use PMUG Corner.

Since the LaserWriter in PMUG Corner was one of the few available anywhere at the time, participation in PMUG was important to those outside the University. The official emphasis, however, was still on providing support for University students, faculty, and staff.

After Dave Dougherty graduated and went to teach in California, I was elected the president of PMUG. The percentage of non-University members was steadily increasing; however, Apple found it convenient to continue to give us special consideration as an AUC-related club, while still allowing us to provide information and support to those outside the University.

A letter to Phil Thompson received after the 1986 Mac Fest, one of several that PMUG arranged and sponsored in the 1980s.

One highly successful project undertaken by PMUG in those early days was a MacFest, bringing Mac experts and third-party vendors to an open computer fair ostensibly (and therefore underwritten to an extent by Apple) for Princeton students—but open to the general public. With the help of Apple we were able to attract big name speakers and make the event a huge success. In fact, we ran three (or was it four) of these MacFests annually while I was president of PMUG.

By the time that the Computing and Information Technology office (under University Vice President Ira Fuchs) took over the Computing Center and most other computer support activities (including the School of Engineering Microcomputer Applications Laboratory), non-University members of PMUG had grown in number to the point that the constitution soon was changed to allow them to be the principal officers of the club. And, as they say, the rest is history. 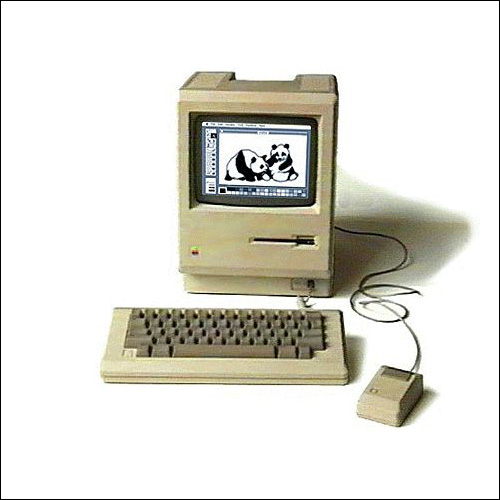 The First Macintosh Computer was introduced by Apple Computer, Inc. on January 24, 1984. The one pictured here belongs to Andy Baird, the second PMUG newsletter editor, and is displaying the MacPaint graphics program. Andy says he accomplished much with his Mac, including writing, indexing, and publishing the 130-page monthly PMUG Software Library catalog, as well as writing monthly tutorial articles.

Take a look at our many benefits in this handy brochure. (pdf)